I strongly recommend reading KSAC #17 – Advertising Tips & Stats first if you haven’t yet.

Welcome to part 2 where we get to the nitty gritty for the information and stat junkies.

Here I’m going to openly display our full advertising stats and together we’ll take a look and draw some conclusions.

Fortunately Calliope Games was cool enough to be open about these stats too so you could benefit from their experience as well.  So let’s start with The Titan Series’ BGG ad data, courtesy of Ray Wehrs and Cassidy Werner of Calliope Games.

I want to start with this one, because even though it’s the biggest ad campaign we’ll discuss (over 5 million impressions!), it’s really concise and there is a lot we can pull from it in an easy to digest manner.
(Note: BGG gives you “Bonus free impressions” on the homepage if you spend enough. That’s what the right section is, for the same dates established on the left. You’ll see that a lot in the following charts.)

Taking a look at the yellow rows where the campaign was in Preview stage. (They advertised their preview page like we did for ADAPT 1.0, even more so actually, which is why, of course, that we reached out to them).

Calliope was kind enough to share their stats advertising on TGN and through AdRoll too. Here they are.

These happen to be combined into large Preview Page and Live Campaign sections instead of by month.

That’s a great view of a Seasonal and Monthly analysis.

Starting in the past, and working our way forward, first I present our Data on The King’s Armory ad campaign. It’s a great jumping off point because it was a solid 30 day campaign for a successful Kickstarter, features stellar CTRs, and even used mostly animated flash ads.

I’ve split the chart wherever we updated/refreshed our ads, and therefore temperature-highlights are focused within each ad-block.  Yellow dates are “Coming soon” ads. 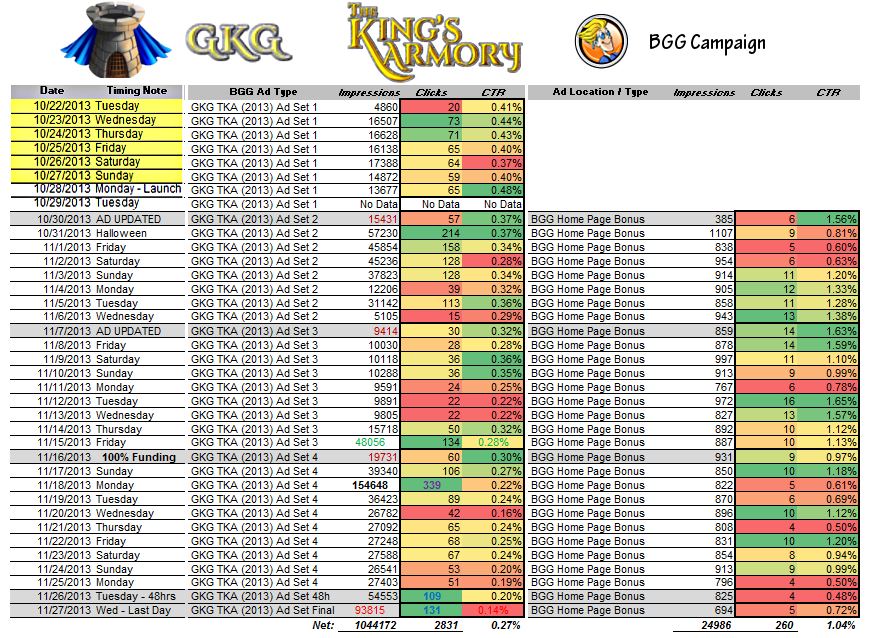 Here is our Halfsies Dice Campaign Daily Ad data. You’ll see a short formal preview time, which I consider fairly successful since it was only 4.25 days in advance, and then the daily data for the entire 34 day campaign. 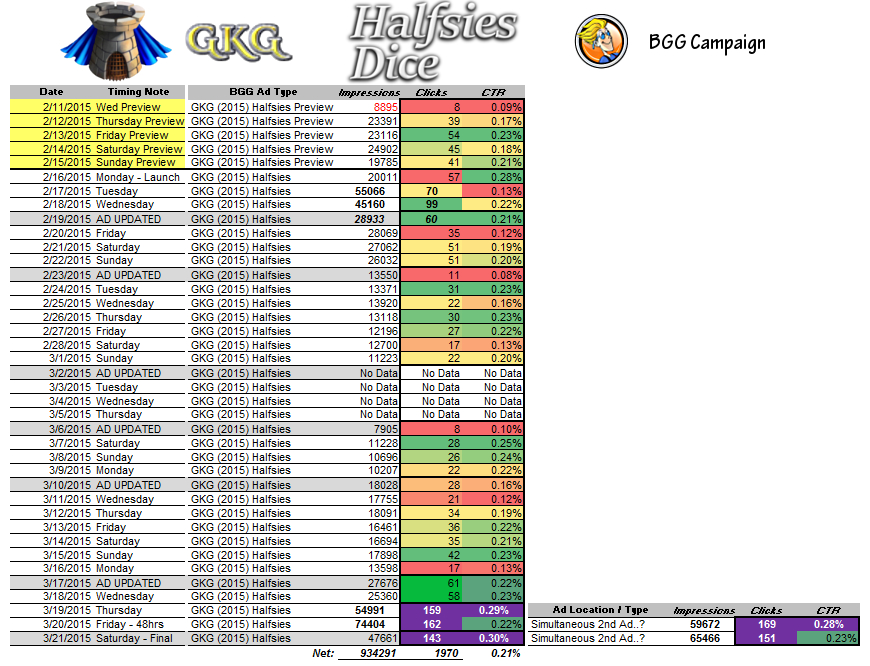 Here is our ADAPT (1.0) Data, but there’s a lot less to take from it as it was so very short. I actually pulled all ads 5 days before formally pulling the Kickstarter Campaign to save money when I knew a cancelling was inevitable. The campaign didn’t never ran long enough to update the ad.

The Biggest Question: Are certain days of the week better?

I don’t believe this data lends evidence that one day or another can be counted on for more clicks reliably, but it does begin to indicate that Thurs-Sunday is pretty decent and Monday just might be the worst.  (Makes one wonder then why Mondays seem good for pledges, while the weekends tend to slump.)  But remember, this is only “clicks“.

Now looking, rather, at CTR, the more reliable stat, we see a pretty balanced week for TKA aside from a notable dip on Wednesday; while Halfsies shows a Thursday and Sunday as peaks. – Looking at this data I’d conclude that every day of the week is reliable for getting clicks, with Monday & Wednesday indicating a lull, and Thursday indicating a boon. – Whether those clicks result in pledges or not is a whole different story. For that I’d study Kicktraq’s “daily data” which shows consistent jumps on Mondays, and lulls on Sundays. If anything, that would be what answers the question “what days are best to advertise”.

Here’s just a quick snapshot of what I mean there. 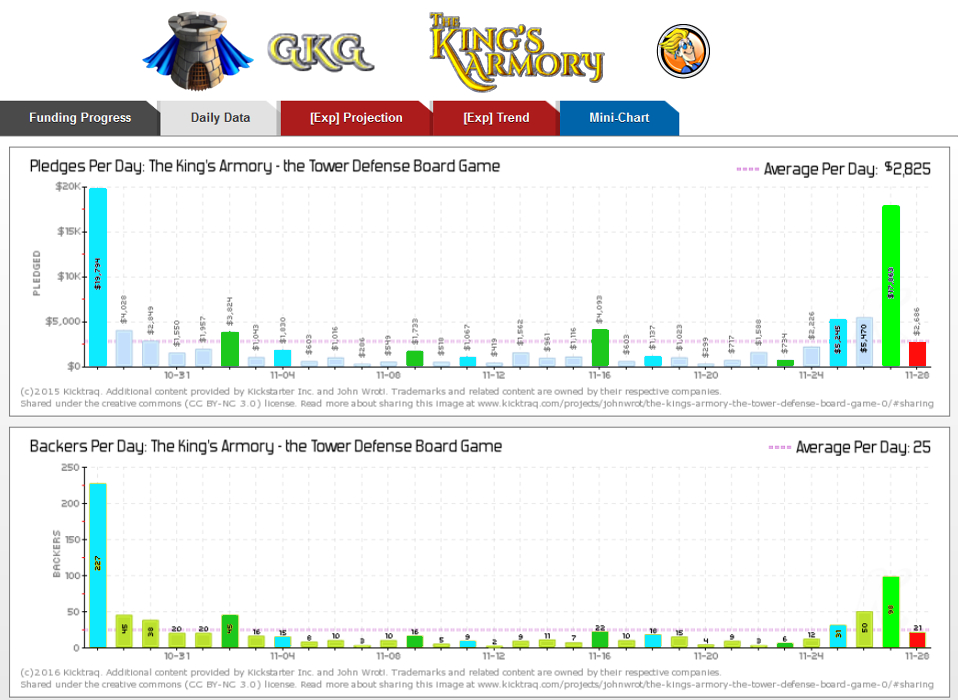 This data here shows that for TKA Monday (Cyan) and SATURDAY (Dark Green) were the best days for both backers and pledge income.  The last day is Neon Green, and the last 3 hours (Red) kicktraq treated as a new day due to timezone issues; I merge that data with the last day when thinking on it. 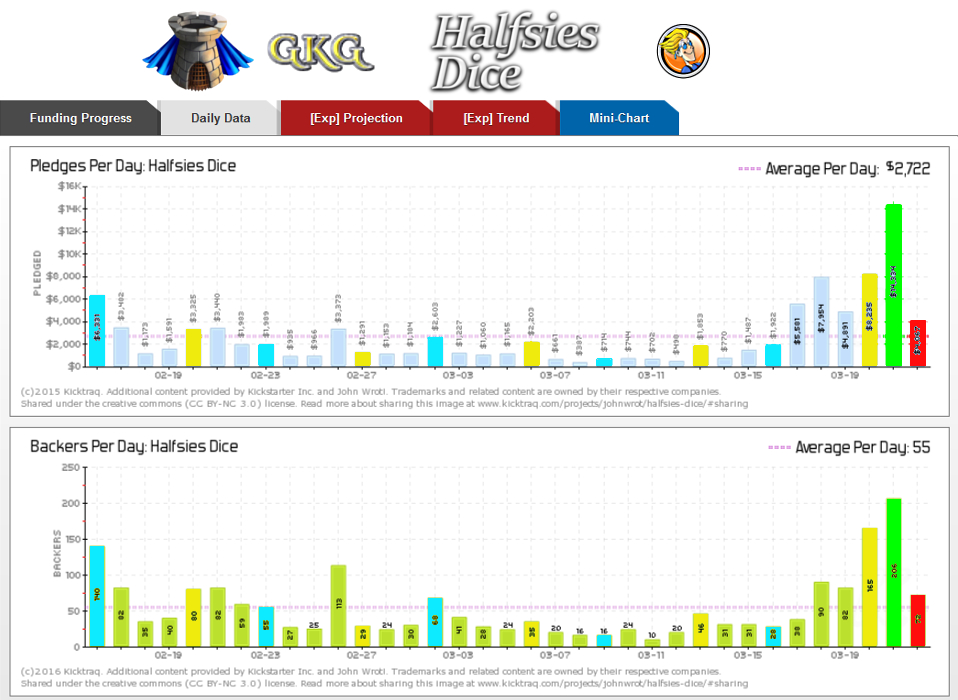 Finally, I want to show some very interesting “Data by Country”. The takeaways here bear far less on how you advertise, or even who you advertise to (as I don’t think you can control it on BGG), but it shares a lot of international data about where your biggest markets are.

I put the Takeaways right on each campaign’s column, for ease of association.

Brace yourself, this image is huge…

Top Countries to Advertise in (Geotargeting)

…based on CTRs and actual order rates.

Taking into account three campaigns, the numbers are very consistent. 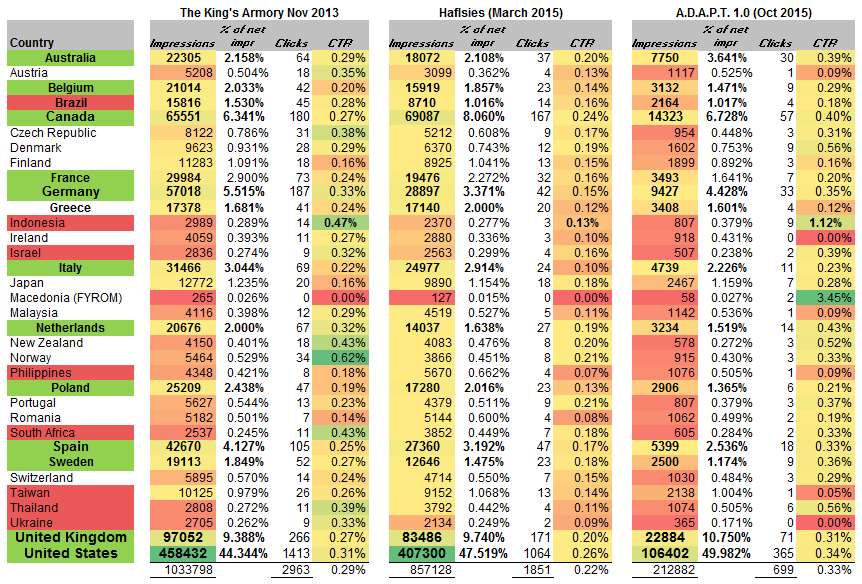 Amidsts all this data, there’s surely something I’m missing. If you find anything of note in these tables and charts, please share it with us below. And if you found this article helpful, please use the links in the right sidebar to share it with someone you think will appreciate it.

😃 Gate Keeper Games is moving to Indiana as we prepare for the launch of The King's Armory, the 7th Anniversary Edition! - The webstore WILL remain open, but shipping will be PAUSED until October 29-ish (When the moving truck is unpacked!). Coupon Code: HOOSIERS for 10% off during this time. Dismiss