That was the title for a thread that John began on Board Game Geek. We ran a Kickstarter for The King’s Armory, and it raised over $25,000! But, it didn’t raise what was needed to produce the game. So, in addition to all of the comments we received along the way, we sought out more … and received over 120! Among the feedback were positive comments like an appreciation of our community-fostering, friendly atmosphere and transparency, and negative ones like having a funding goal that was too high and inconsistent art. 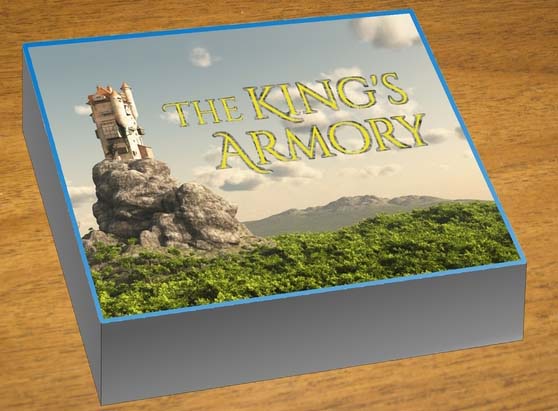 Here’s an example of art that people said
MUST be improved with graphic design before the campaign begins.

THANK YOU to all who contributed feedback, either in this thread or in our backer survey.
So, we’ve been searching for other production companies (though of course we did this the first time as well…but we’ve learned a lot since we started this gig in the spring!) and any other way we can possibly reduce that funding goal.
To help out with that & with producing more high-quality art, we’re running an indiegogo campaign to prime our re-boot later in October. The IGG campaign is to raise $ for game art that will be ready on day 1 of the re-boot, and reduce the ultimate funding goal (b/c the art will already be funded). We of course paid for a lot of art out-of-pocket on the first round, but it wasn’t enough.

The fun thing is that the indiegogo rewards will be (a) useful for gamers & non-gamers alike, (b) available whether or not we receive full funding, and (c) delivered in time for Christmas! We really hope people are able to support.

In any event, though, this project has indeed fulfilled our mission to build community through board gaming, and has sharpened our virtues of humility and perseverance.
That is a success.